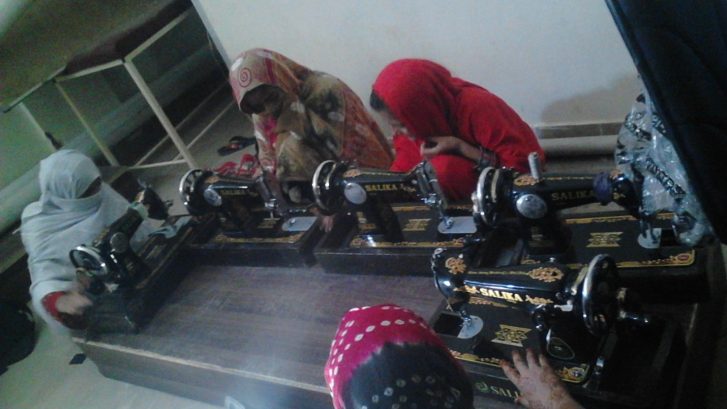 Following services are being delivered in the community of Sikanderabad under supervision of Ziauddin University Department of Family Medicine.

2) Adult literacy program: 5 schools are being run in the community where women are trained for basic mathematical concepts to make them capable enough to do minor transactions.

3) Computer training program: Men and women are trained in basic computer literacy to make them eligible to acquire jobs as receptionist/ cashier etc.

4) Sewing course for girls to make them able to learn the skill and contribute to their families and become productive members of the society.

5) Community Health worker course in which men and women are trained to triage patients, take vitals, be able to put intramuscular and intravenous injections and dispense medicines in the pharmacy.

The concept of Community-Academia partnership was initiated in 1997 with the establishment of Ziauddin University as a policy decision to increase access to healthcare for its nearby population. Professor N.A. Jafarey the 1stVice Chancellor of the university was strong proponent of civic engagement of academic institutions. In pursuance of this objective, the Department of Family Medicine was formed with principles of Community Family Medicine as core guidelines.
The engagement between Ziauddin’s University students of multiple disciplines, the team from the department of Family Medicine and Community Health Sciences together with the Sikanderabad community has resulted in the development of strategic
guidelines for comprehensive health care delivery. The program is run inside a primary health care center donated by the community. Community members and university students from the faculties of medicine, dentistry, physiotherapy and pharmacy work collaboratively to provide primary health care. Though the center is open to everyone,women are the main beneficiaries.The mutual trust and teamwork have facilitated the implementation of various programs that has led to increased utilization of services and equitable access to healthcare and to making in-roads in the areas of adult Female Literacy and vocational training; resulting in continued efforts in community empowerment and the development of a self-sustainable
and replicable, indigenous model of health care.
The global award winning health care program has ensured in the successful immunization drives through door-to-door student campaigns, significantly helping to raise the community’s awareness of health issues and interest these endeavors have led Sikandarabad to stand as a polio free area.
Ziauddin University student’s civic initiatives organized form time to time through their organizations such as KARA and AIDS has helped in building bridges in striving to achieve health objectives, with community fully engaged and empowered In 2016 Ziauddin University Karachi earned the 2nd place in the prestigious MacJannet Prize for Global Citizenship, for its Sikanderabad- Ziauddin Community partnership initiative. . More details about the MacJannet Award can be found on the following Tallories Network website:http://talloiresnetwork.tufts.edu/2016-macjannet-prize-winners/

Note: limited seats; kindly get your Registration done latest by May 21, 2015.

*Please Bring Along your PMDC Registration Number its Mandatory

Nursing Day Celebrations, 2015  for or Hospital Staff( Nurses and technicians)

Ionizing radiation has been in diagnostic and therapeutic arena for more than 100 years with an exponential rise in its application in the last 3 decades. We are also cognizant of hazards associated with ionizing radiation to patients and radiation workers. Exposure to patients could be minimized by strategy of justification and optimization while workers can minimize the exposure by practicing fundamental principles of radiation protection. The purpose of this symposium is to bring together representatives from the various clinical domains and Pakistan Nuclear Regulatory Authority ( PNRA ) to disseminate the knowledge about hazards and ways of safe handling of radiation by healthcare providers.

Brief Proceeding Of The Symposium

This symposium was organized by the Department of Nuclear Medicine under the auspices of Radiation Safety Committee (RSC) of Dr. Ziauddin Hospitals. Purpose of this symposium was to enhance the understanding of radiation workers medical personnel about the justified utilization of radiation in the diagnosis and treatment, the impact of radiation on human body and various methods and local regulatory rules for radiation protection.

In her inaugural talk the Chairperson RSC and Nuclear Medicine department Ziauddin University Dr. Nosheen Fatima explained the audience about the vision of new RSC to ensure safe radiation practice at Dr. Ziauddin Hospital. She explained to the audience the various types of radiation exposure and types of radiation use in medical fields and concepts of classification of radiation areas in working field for better understanding of personal protection by the workers. She told that 80% of total radiation exposure to mankind is from natural sources while medical and professional exposure contributes 20%.

Dr. Maseeh-uz-Zaman Section Head Nuclear Medicine and Associate Professor of Aga Khan University Hospital talked about the interaction of radiation with living tissues and their possible deleterious effect. He explained that in medical imaging probabilistic effects of ionizing radiation like hereditary and chromosomal abnormalities are important and this can be minimized by reducing unjustified radiation exposure.

Mr. Amir Ali Radiation Protection Officer Dr. Ziauddin Hospital talked about the safety measures which are supposed to be taken by radiation workers to ensure the safe radiation practice. He explained to the audience the importance of radiation protection principals, methods and monitoring of radiation exposures.

The Chief Guest of this symposium Mr. Khalid Hussain, Regional Nuclear Safety Directorate PNRA, thanked the RSC at Dr. Ziauddin Hospital for the invitation and congratulated the RSC for holding such a successful event for a unique cause. He also talked about the positive role of PNRA and its licensees in ensuring radiation safe Pakistan.

The workshop will focus on non invasive ventilation, asthma and spirometry techniques.

A workshop on the role of vaccines.

We participated in the seminar where Dr. Nosheen from the Nuclear Medicine delivered a speech on “Osteoporosis awareness and prevention”

The purpose of the event was to create awareness among the masses as to how “Early detection is the best prevention of breast cancer”.

The purpose was to educate the public on the symptoms, prevention and treatment of breast cancer.

The meeting conducted was similar to the August meeting and residents also attended the meeting. Dr. Imtiaz Hashmi, Dr. Idrees Shah and Dr. Amir Ashraf from our orthopedic department delivered speeches at this occasion.